Take advantage of the season's abundance of clementines and make this delicious Instant Pot Orange And Lemon Marmalade. Easy to make, and perfect to give as a gift (or to keep for yourself!), this orange and lemon marmalade will add a bit of sunshine to your cold winter mornings!

So, let’s talk about this orange and lemon marmalade for a moment. If you’re looking for a great way to embrace the citrus season and add a smile to your face every morning, this is the way to go my friends. I’ve made this marmalade for the past couple of years to give as holiday gifts – it’s lovely when packaged in pretty little jars and tied with a ribbon - but it’s great for any time of year (and you’ll probably want to keep it for yourself anyway).

How To Make Marmalade

The Instant Pot makes this lemon and orange marmalade super easy to make.

A Few Notes About Making Marmalade

How To Know When Your Marmalade Is Done

If you're a first-time marmalade maker, it can be difficult to know if the marmalade is done or not. A simple trick is to put a plate into the refrigerator prior to starting your marmalade-making journey.

When you're ready to check if the marmalade has set, just pull the cold plate out, add a blob of the marmalade to the plate, and tip it to see how it rolls. If it's still pretty runny, it probably needs to boil for a bit longer. If the blob stays put, or forms a bit of a skin on the surface and wrinkles a bit when you nudge it with your finger, it's ready to go.

What To Do If My Marmalade Doesn't Set

If you have trouble getting your marmalade to set, you can try boiling it for a bit longer, and/or adding a bit more pectin. While lemons and oranges do contain a lot of natural pectin, some varieties (like Clementines) have lower amounts which may be affecting the set time. You can try adding a bit of lemon juice (about ¼-1/2 cup), or a bit of bottled or packaged pectin to move the process along.

If you do give this Instant Pot Lemon And Orange Marmalade a try, let me know what you think in the comments! And don’t forget to tag me on Instagram! I love seeing your photos!

Check Out These Other Great Sauces And Spreads! 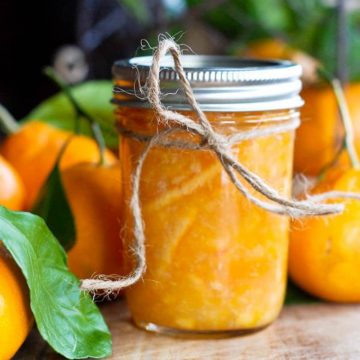 Author: Sarah Jenkins
Take advantage of the season's abundance of clementines and make this delicious homemade orange marmalade. Easy to make in the instant pot, and perfect to give as a gift (or to keep for yourself!), this orange and lemon marmalade will add a bit of sunshine to your cold winter mornings!
Print Recipe Pin Recipe
Prep Time 15 mins
Cook Time 20 mins
Total Time 35 mins
Course Breakfast, jam, jelly, sauces
Cuisine American
Servings 6 small jars