This Cinnamon Raisin Bread Recipe, stuffed with rum-soaked raisins and swirls of cinnamon sugar is the best thing to make on a cool Sunday morning. It makes a great piece of toast or is delicious when served warm, straight from the oven.

Who’s ready for spring?  Today finally feels a little bit like it here in Colorado. The birds are chirping, it’s sunny out, and the weather feels like it’s starting to warm up just a bit.  But I know it’s a farce – heavy snow and plunging temps are predicted for the next few days, leaving this glimpse into warmer weather in our wake.

But, one saving grace is that it still makes it ok to enjoy the comfort foods of winter – the slowly braised meats, the hearty stews, and of course, the indulgent breads that have been gracing our tables lately.

Is there anything better in the morning than the smell of homemade cinnamon raisin bread wafting through your kitchen?  Seriously, it is the best feeling. Especially on a cold day, with the snow and wind whipping around outside while you remain cuddled by the fire, sipping your coffee, and enjoying a slice of this amazing cinnamon bread.

This is a basic yeast bread and simply incorporates a bit of cinnamon, sugar, and rum-soaked raisins to add a bit of something special to your morning.  Soaking the raisins (even just in water) makes them extra juicy when baked and the rum adds a delicious decadent flavor.

I love how this bread tastes, but I can’t lie. The Type A personality inside me also loves how it looks. Those perfect swirls that appear upon slicing are so pleasing to me and look so lovely when served.

How To Make Cinnamon Raisin Bread

You may think that a rolled bread would be complicated, but this cinnamon bread is pretty easy. Not counting the downtime in between to allow the dough to rise, it doesn’t take all that long to make. It’s the perfect bread for a holiday brunch, a special breakfast, or when you just want your house to smell amazing!

(Note - this recipe makes 3 loaves, which, unless you’re serving a crowd, you may find hard to eat quickly. But no fear! The loaves freeze well and are the perfect treat to pull out when you find yourself with unexpected house guests. They're also great for a simple brunch or coffee date. Just wrap the loaf in plastic wrap and place it inside an airtight ziplock bag in the freezer. It should be good for about 3 months.)

I’d love to hear if you tried this Cinnamon Raisin Bread Recipe!  Tag me on Instagram or let me know your thoughts in the comments! 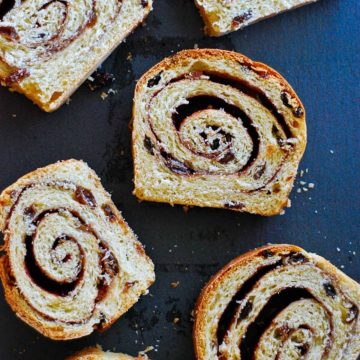