This Perfect Peach Pie Recipe is the best way to use up those summer peaches. A crisp, buttery pie crust filled with a juicy and flavorful peach pie filling makes this pie unbeatable.

Are you intimidated by pies? I sure use to be. The best ones really are from scratch, but making your own dough, rolling it out, creating the filling….and the fancy designs or lattice work on the top? Forget about it. It all seemed to be too much hassle.

Until I actually made one. And then I realized that the hardest thing about making a pie is making the dough. And the hardest thing about making the dough is that you need to plan a little bit for it in advance (it needs to chill). You can use almost any filling you want (even savory ones!), and there’s no need to get all Martha Stewart on the top – a full-on double pie crust with slits is just fine and tastes exactly the same as one with fancy cut-outs or latticework. I promise.

We had guests in town this past weekend, which made it the perfect time to whip up a fruit pie in advance, and lucky for me, it’s peach season here in Colorado so they are literally EVERYWHERE.

There’s no shortage of great peach pie recipes out there, but one I come back to over and over is the New York Times Perfect Peach Pie. The crust is buttery and delicious, the pie filling has a good consistency, and it comes together pretty easily. (Also, did I mention your house will smell AMAZING when this baby is cooking? Prepare yourself!) The only adjustments I made to this recipe were to add a bit of cinnamon to the flour, which gave the crust a good flavor, and to reduce the sugar to ½ cup from 1 cup, which makes the filling just a bit less runny.

Really, making the crust is the most work here, but only because you have to plan for it in advance. I often make the dough for the pie crust a day ahead so that when it’s time to cook the pie, it’s easy to pull together quickly. You can also make a double batch of this dough and freeze it to use later when the mood strikes you.

Of course, if you must use a ready-made pie crust, that is totally fine. (And trust me, I get it - we all only have so much time on our hands.) But you guys, this NYT pie crust is seriously to die for. It uses all butter - no shortening here. It's flaky, flavorful, and crisp and bakes up beautifully. This is the pie crust I come back to again and again for all my pies and it never disappoints.

To make the pie crust, combine flour, salt, cinnamon, and butter together. A food processor makes this easy, or you can cut or grate the butter into the flour mixture (with knives or a pastry cutter if cutting the butter, a grater if grating it) and then finish it up with your hands.

The mixture will be a bit pebble-like. This is what you want. A tip for your pie crust - the colder your butter, the better. Those little pebbles of butter are what will help to create the layers in your pie crust and make the crust nice and flaky. I like to keep sticks of butter in the freezer, then use a grater to grate the frozen butter into my flour mixture. This makes it super easy to combine with your hands and the grated slips of butter create 'pockets' in the dough, causing them to puff up when you bake it.

Next, mix the egg yolk, vinegar, and ¼ cup of ice water together. Drizzle a little bit of the mixture over the dough, and gently stir to combine. Keep adding a little more liquid, a little at a time, until the dough starts sticking together a bit. (Note – I ended up some extra cold water to my dough because it wasn’t sticky enough.)

Turn the dough out onto a lightly floured surface and roll it up into a ball. Divide the ball into four with a knife, then flatten each ball with the palm of your hand to expand the pebbles of butter. (This improves the flakiness of the crust by distributing the butter more evenly throughout the dough!)

Gather the dough together again and then divide it into two pieces – one of these will be for the bottom portion of the crust, and the other for the top, so make one slightly larger than the other. Flatten each ball into a disc and wrap them in plastic wrap. Place in the refrigerator for at least 60 minutes. (I refrigerated mine for about 24 hours since I wasn’t using it until the next day.)

This pie filling is super juicy and is really easy to make since you only need 5 ingredients.

To make the filling, first, peel and cut your peaches. This may feel intimidating, but it actually isn’t hard at all if you know how to peel a peach.

(Note - I find that peeling the peach is actually pretty easy and makes for a nice consistency in the pie. However, many reviewers claimed they didn't even bother with this process and the pie still turned out fine. You do you.)

Once your peaches are cut, combine the cut peaches, flour lemon juice, and sugar and set aside.

Remove your dough from the refrigerator. You may need to let it sit for several minutes if it's too cold to roll out just yet. Once it's easily manageable, roll out your two discs of dough on a lightly floured surface, and place the larger one in a 9-inch pie plate.

Add an egg white wash to the bottom pie crust before adding your pie filling. This helps the crust to remain crisp and creates a seal between the crust and the filling

Pour the pie filling into the prepared crust and then sprinkle the mixture with nutmeg.

Prior to placing the top crust on your pie, brush some water around the edges of the bottom of the pie crust. This will help to create a good "seal" for the pie and keep it from separating during baking.

To finish assembling the pie, place the smaller sheet of dough on top of the peach pie filing and crimp the edges together. You can do this easily with your fingers, or a fork. Next, add an egg wash (basically a brush of egg white across the top o the pie), and sprinkle on some granulated sugar. Finally, cut 4 slits on the top of the pie to allow it to vent. Then bake it for about an hour, and you're done!

This pie does take a little bit of work, but it's totally worth it in the end. And, it's a wonderful way to make the most of all those delicious summer peaches!

Serve it hot, with a large scope of vanilla ice cream, and enjoy!

If you make this Perfect Peach Pie, let me know what you think in the comments below! And don't forget to tag me on Instagram - I love to see your creations! 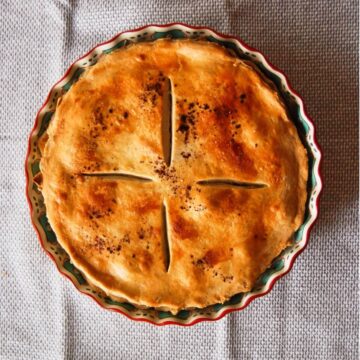 For the Pie Dough

For The Peach Pie Filling

To Make The Pie Crust