This Easy Corn Chowder Recipe is chock-full of deliciousness and uses fresh corn, onion, bacon, potatoes, and cream to give it a luscious, creamy texture. Summer in a bowl!

Chowder.  It’s something I think of when I think of fall. Or New England. Or Seattle, where we had some of the best clam chowders ever at Pike Place Market.  But chowder in the summer? It never really crossed my mind – until now.

Making soup in 90-degree heat may not exactly be your ideal summer meal, but this corn chowder does not disappoint and is such a great way to utilize some of the delicious sweet corn that’s in abundance this time of year.

I came across this recipe totally by accident – I was leafing through old Cook's Illustrated and Cook's Country magazines that have been lovingly stuffed in with all my other cookbooks for the past several years trying to find a specific recipe.  As I was thumbing through the pages, I stumbled upon this recipe for summer corn chowder and thought - sure, I’ll give it a shot.

Are you familiar with Cooks Illustrated or Cooks Country? They’re basically the magazine for America’s Test Kitchen, and they literally test hundreds of combinations and techniques for every recipe until they get it just right.

While Cooks Illustrated recipes tend to be a bit more in-depth or complicated, Cooks Country recipes are relatively simple. If you’re looking for a no-fail recipe, they’re definitely a great place to find it.

What Ingredients Do I Need?

Corn chowder is the best soup for hot weather because it just tastes like summer. The sweet corn mixed with the spices and cream then topped off with fresh summer garnishes like chives, and parsley – seriously yummy.  And, while this is hearty enough to be your main dish, it's not too heavy for those warm summer evenings.

It comes together quickly and uses basic ingredients, most of which you probably have on hand.  Here's what you'll need.

Many recipes call for preparing corn soup with a corn stock, which is made by boiling the husks in a mixture of water, onions, milk or cream, and other spices, depending on your recipe. This corn chowder recipe simplifies that process by throwing the husks directly into the soup, then discarding them later. Such a time saver and still so good!

How To Make Corn Chowder

As with many of the recipes I post here, this one can easily be made on a weeknight. It's a light dish to serve on a warm summer evening.

This easy corn chowder recipe is so delicious, but you can amp up or change the flavor by adding different ingredients. Try any of these for a variation on this classic recipe.

This chowder paired perfectly with a light flatbread and a side salad.

If you try this Easy Corn Chowder Recipe, let me know what you think in the comments. And don't forget to tag me on Instagram so I can see your beautiful creations! 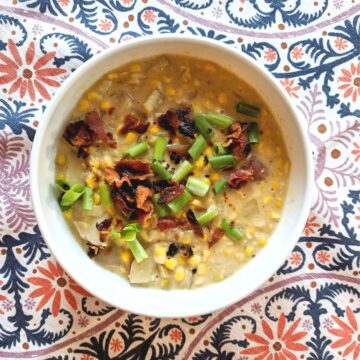